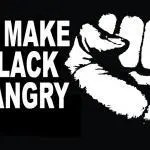 The owner/CEO of Red Bull energy drinks just fired a whole passel of SJW’s because they were trying too force him into supporting Black Lives Matter.

He might not have had a job, but he had a vocation: Telling the world that black people are victims of relentless white racism. And that was the biggest danger to black people.

Not other black people.

That self deception killed him.

We are re-working our podcast, with more exclusive content, sales of uniqueproducts and services