New book from the author of White Girl Bleed a Lot. 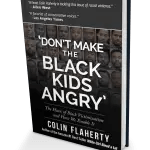 The hoax of black victimization and those who enable it.

Black people are relentless victims of relentless white violence, often at the end of a badge — for No Reason What So Ever.

That was the biggest news story of 2014 and it was easy to find in the New York Times, CNN, MSNBC, Spike Lee, Oprah, USA Today, and lots of other places.

War on black people, anyone?

The President got in on the act in 2014 when he told the Congressional Black Caucus about a “justice gap.” Where “too many young men of color feel targeted by law enforcement. Guilty of walking while black. Driving while black. Judged by stereotypes that fuel fear and resentment and hopelessness.”[1]

That is the biggest lie of our generation. Because just the opposite is true.

Black crime and violence against whites, gays, women, seniors, young people and lots of others is astronomically out of proportion.

It just won’t quit. Neither will the excuses. Or the denials. Or the black on white hostility. Or those who encourage it.

That is what ‘Don’t Make the Black Kids Angry’ is about.

The Return of Racial Violence to America and How the Media Ignore It.

The only book to document the recent epidemic of black mob violence, including the Knockout Game: Hundreds of examples in more than 100 cities. In the last three years.

You can get one too! And more.

Allen West: “At least author Colin Flaherty is tackling this issue (or racial violence) in his new book, White Girl Bleed a Lot: The Return of Racial Violence to America and How the Media Ignore it.“

WND.com: “Colin Flaherty has done more reporting than any other journalist on what appears to be a nationwide trend of skyrocketing black-on-white crime, violence and abuse.”

Jack Cashill: “In White Girl Bleed A Lot, Colin Flaherty bravely goes where the major media dare not follow. In short, he tells the truth about America’s otherwise unspoken epidemic of black on non-black crime.” “What makes this otherwise grim saga so readable is Flaherty’s magical sense of humor. Among contemporary authors only Flaherty’s fellow alchemist Mark Steyn has a comparable ability to transform dread into gold.”

Slate: “Colin Flaherty is at the epicenter of the Knockout Game.”

Milt Rosenberg, WGN: “My compliments to Colin Flaherty for White Girl Bleed a Lot. A very interesting book that points out an important problem that needs to be confronted.”

Front Page magazine: ““While Girl Bleed a Lot” is an important entry into the debate over whether black racial violence exists and whether it should be reported on. While the debate continues, the book breaks through the barriers of censorship and transcends the anecdotal for a raw snapshot of cities under siege and a nation in denial.”

Racial violence is back.

Along with racial lawlessness and even riots.

You didn’t hear about it?

The Midwest state fair with a “Beat Whitey Night?” Or the Black Beach Week that turns a town into “living hell?” Or the school principal who blamed Asian students for being racist after suffering years of abuse?

The eleven episodes of racial violence on the Fourth of July 2012? Some involving more than 1000 black people?

These criminal episodes go by different names: Flash mobs, flash robs, black on white crime, or as one social worker put it: Kids just “blowing off steam.” Anything except what they are: Racial violence.

Now for the first time, a new book breaks the code of silence on the explosion of racial violence in more than 100 cities since 2010. All “impeccably documented,” says the Houston Examiner.

with Allan the BSG and Mr. Nuffin

Hoax Podcast #24 with Allan the BSG and Mr. Nuffin – Stefan M ‘The truth about slavery’

Hoax Podcast #34 – Diversity and JLP “White People. What are you doing?”

Black Farmers – On your dime: Hoax Podcast #33 w/Allan the BSG and Mr. Nuffin