News from Meriden and DeAndre Felton 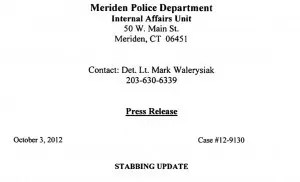 Here’s the police report on the the stabbing of DeAndre Felton:

I’ve been all over worldstarhiphop and can’t find the video. I guess when the knockout game goes wrong and you end up like chopped pork, it’s not as much fun for the homies to watch.

“Some men, you just can’t reach. So we get what we had here today. Which is the way he wants it. Well, he gets it!”

He should have hunted down and killed the rest

even though the man was defending himself from a blatant unprovoked attacked. He will basically be dragged through the mud and will suffer tremendous financial and mental stress. I feel very sorry for him. It would have been better if he were NOT identified as he was really the “victim” in this instance.

It’s wonderful that the intended victim was able to adequately exercise violence to defend himself against violent perpetrators intent on harming him. The most loving thing you can do for all involved is not to permit yourself to become yet another victim statistic by those who seek to violently harm, murder, and rob innocent people. Let that lesson be learned by all who read this.

‘Knock Out Game’ isn’t so funny is it.