Is someone punking me? Racial violence even worse than yesterday. 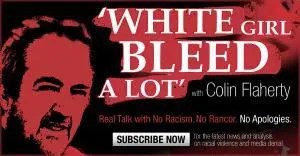 So last night I send out an email: Worst case of black mob violence ever, I told the people who signed up for email alerts.

it was bad because it was on video, the reporters totally screwed it up, and the white kid who was  victim of repeated black mob violence got suspended for three days.

So this morning, within 15 minutes, I get three videos: Each worse in their own way.

One from Long Island: A white guy is attacked by a black mob, and he takes a knife and uses it on his attacker.  He is arrested for manslaughter. The reporter waxed sadly about the dead guy’s family. You know: The guy who tried to kill the white guy but who himself got killed.

Then down to Baltimore: A wicked case of black mob violence on a girl is described as a prank.

Then over to Atlanta, where a video tape shows the chaos in black classrooms. The comments tells the rest of the story: This happens a lot. All over the place.

If you know we cannot wait for local and national media to figure this out, the SHARE, LIKE, SUBSCRIBE.  That’s the easiest and best thing you can do.