Let’s stop begging for mercy from the liars and deniers of racial violence. #WhiteGirl #AnthonyCumia 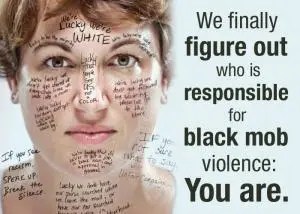 One of my Twitter followers was complaining that people do not believe here when she tells them black on white crime is greater than white on black.

She was sad they thought she was a racist.

As you might imagine, I get doubters and deniers all the time. That is why I wrote White Girl Bleed a Lot.

I don’t argue with them. Nor do I want them to like me.

Just the other night, someone said to me on Facebook that if he wanted to, he could produce all these videos of white on black violence.

So I challenged him to a contest and I went first: I just went to my web site and started pulling videos of my list of Top 200 Black Mob violence videos.

And meanwhile, Kevin Carter discovered his Facebook page was not working and it would not let him post his links.

I told them to post them at White Girl Bleed a Lot, and I would move them over.

If it sounds I am a bit impatient with the whiners, I am: We have the facts. The videos. The witnesses. The victims.

But you have to use them.

Not beg people to believe you without evidence.

Then be surprised when they do not. And scorn you and call you names.

The deniers are bullies.

And we have to treat them that way.

Let’s start by not begging them for mercy.