Black mob violence in San Antonio: “Yes they were black.”

The local press had a lot of trouble with this one.

Cody Robinson left a San Antonio bar and was punched, kicked and finally knocked out by a mob of black people.

The local newspapers ignored the race of the predators.

The local TV news shows reported the attackers yelled ‘get the white boy’ and ‘knockout’ but they did not describe the alleged assailants.

Leading many to think the attackers might have been in Hispanic in this Hispanic Town.

Finally, the victim Cody Robinson straightened everyone out in the comments section.

Here is what Cody wrote:

Yes they were all black.

It was literally minutes later that I was trying to get in my car after talking to the first group that the attack started. When I tried to get in my car I heard “get the white boy” and when I turned around I got hit and fell.

I try and try to think about what they wanted from me, it’s like they wanted more then my wallet and my phone. I think they had originally planned on knocking me out cold in the first hit, throwing me in their SUV and taking me to my house to rob it. It’s the only logical reason I can think of that they wanted me completely knocked out, besides that they were playing that game.

From KSAT News, another statement from Cody:

I was leaving the establishment around 1:00 am not at 2:00 am when it was closing. Been there before and never had any issues. After they yelled “get the white boy” and hit me and I fell on the ground I heard them yell “KNOCK OUT”. After I talked to the first group, we didn’t have any problems.

It seems another group I didn’t talk to saw me going to my car, and targeted me, and followed me. It was a random act of violence that could have happened to anyone. I didn’t instigate it. Usually when someone is attacking you, you know what you did so you can gauge the level of hatred that have.

But with these guys I had no way of telling how bad they wanted to hurt me at first, because I didn’t do anything to them. Even when they were stomping my head and I was screaming “stop, you’re killing me” and they continued, even harder. There were at least 5-6 guys hitting me. 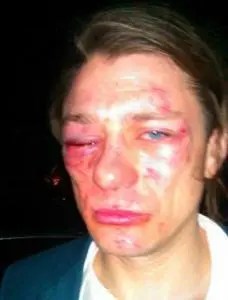 People who tolerate these attacks (dirty Democrats, Lying Stink Media, Odumbo the Racist, and Racist Slime Eric Holder) are just plain evil…time to stop them and make them pay the piper

Mr. Robinson needs a gun and some range time.

How degrading for him that HE had to be the one to confirm they were black! I don’t mean to sound melodramatic, but it’s like another kick to his head. This happens all the time and needs to stop. People…the media…needs to stop being so dang afraid of being called racist that they can’t even say “black”.
Just the other day I read an article and went to comment. Someone had posted a comment that included “black man” in it. Two people slammed him SO bad, calling him a racist for not writing “African American”. The guy wrote back and said he was sorry but he assumed the guy might not have African heritage, like himself.

OH HELL NO NOT IN TEXAS REAL TEXANS KNOW HOW TO TAKE CARE OF THIS CRAP.

There is no Texas, there are no more real Texans. It’s now mestizo and ni%%erland. Thanks LBJ

I’m glad he’s fighting back. I’m glad he went on the comments section to set the record straight. I’m glad he’s on television sharing his story. Violence against white people seems to be a taboo subject matter for our current media and government elite, but they can’t keep the lid on it forever.

You’re right. They can’t keep a lid on it forever.

Especially when more of us speak out against what amounts to their criminal behavior of encouraging more of the same.

This Society for Professional Journalists are especially corrupt, because it is they that set the guidelines about what is to be reported and how.

The other web sites are abuzz with white outrage, and it’s growing by leaps and bounds.

I went onto the facebook of Coke denouncing the multi-lingual version of America the Beautiful that was on during the SuperBowl (I did not watch the game), and oh my God, it was an on-line lynching. They came en masse, circling around me, out for blood. I mispelt the word ‘disgusting’ which started it all and disqualified me from having any good points to make. There is a very different form of the USA taking place and I don’t recognize. I do blame such organizations such as the Society for Professional Journalists for the destruction of this once great land.

I went onto the Society for Professional Journalists and just clicked onto thier ‘diversity’ button. All sorts of conditioning it sounds like.

then there are real journalists like colin flaherty. people forget all the time he spent investigating that murder case. because of his efforts, an innocent blackman was released from jail. now lets hope w/this project (“white girl bleed”) we can get the real criminals arrested & put IN jail. it works both ways.