New: Black mob violence in Macon: What’s race got to do with it?

Black mob violence in Macon: What’s race got to do with it?

Black mob attacks white family. Residents say race had nothing to do with it.

Ask anyone who ever took a statistics course if that is true. And by their answer, you will know if they were paying attention. or not.

Two arrested in assault outside WRHS

John J. Owens is absolutely sure race had nothing to do with the reason why 30 black people attacked five white people, including a mom and a baby near Macon Georgia last week.

The alleged assailants and victims could have been any race. “Color doesn’t matter, only the “idiot factor” matters,” opined Mr. Owens. That means the rest is random.

Anyone who ever took — and passed — a course in elementary statistics might wander about why Mr. Owens is so willing to dismiss the race as a factor in the violence. 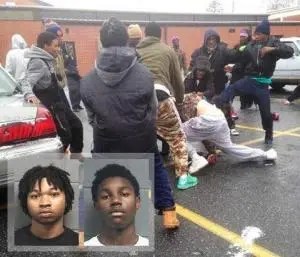 Because the odds of 30 black people randomly attacking five white people — including the woman and child — are about the same as the odds of fully loaded jet liner crashing on your front lawn. Twice. On the same day. With your mom in the first plane. And your long lost brother in the second.

So: That is not to say its impossible. Just not likely.

Even so, lots of people in Macon are wondering why so many people are treading so lightly around the violence.

It started out with a snowball fight among 30 black people at the Warner Robins High School.  The kids were on a snow day. The Telegraph in Macon breaks it down, beginning with the woman who confronted a group of black people for throwing snowballs at her car:

“At that point someone hit her with a snowball, and part of the snowball landed on the baby. The woman’s husband then approached, asked the group to stop and was attacked, he said. He and two other men in the sledding group who came to his aid were assaulted. He said no one in the sledding group instigated physical contact.

“The victim said three of them, including himself, suffered concussions, and one had two cracked ribs. Members of the sledding group were white, and those involved in the snowball fight were black. He said the attackers yelled racial comments at them during the assault.”

Of course there were pictures. And laughing. WGAX TV news called it “a fight.”

The pictures made their way to Facebook and Twitter, with the alleged assailants bragging and having a good old time recounting their snowy victory.

That is how the police cracked the case and arrested Shymalik Raekwon Mitchell and Terrell Antonio Boyd. Both 17 years old. They were charged with a variety of crimes including assault.

The victims are asking their names be withheld because they fear retaliation for themselves and their children, who still attend the school.

As police search for others in the photos that appear to be kicking, stomping, punching and beating the five white people, some of the residents want to let us know what the real problem and real solutions are.

“People get jumped everyday,” said Jon’Shea JS Jenkins on his Facebook page. “ The fact that there white means nothing.  It could’ve been a black guy an it would have been the same outcome some people need to get out of there feelings and mind there business this attack happened because somebody wasn’t minding there business if the police ask me to stop doing something guess what I do.

“But if Tom Dick or Harry ask me I’m gonna look at him like he smoking rocks. It wasn’t right what they did at all but you gotta learn to mind ya business sometimes!!”

And to all the white people in Macon who said these assaults were a racially racially motivated case of black mob violence, Rogue Carlos R Leader  has a reminder and a rejoinder: “The biggest group of terrorist on this planet is white people.”
Follow @ColinFlaherty

Xscilune, so right! We’ve reached the lowest point in our society. White people take your blinders off now!
Protect yourselves, arm yourselves legally. Dont go anywhere alone. Get in the mind set if you don’t get streety and ready to fight and protect , it will get worse. Black thugs depend on their stereotypical view of Whites…nerdy, not ghetto, passive, and not retaliatory.
Change THAT NOW!! GET with the program . Wake the hell up!