Black mob beats and robs boy in suburb of Philly.

Police caught the mob after posting their pictures on Facebook.
Philadelphia News, Weather and Sports from WTXF FOX 29

On Monday morning, Upper Darby police posted images of the suspects to their popular Twitter and Facebook accounts. On Monday night, the parents of two of the boys brought their children to Upper Darby police headquarters for questioning after seeing their sons’ images all over social media, Chitwood said.

“One set of parents were very cooperative” he said. “The other set brought him in because they knew it was him on the social media page.” 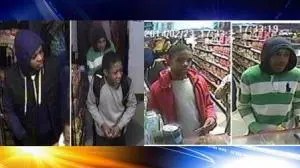 I had to explain to neighbor A, who “lent” $40 to neighbor B, the mentality we’re dealing with. You think you’re being nice and doing a good deed. They think you’re afraid and weak and therefore deserve to be messed with. In their minds, it’s your fault. Besides if they don’t mess with you, you might think they are scared and deserve to be messed with. I explained to A that B will pay back the $40 only if he comes a few days later asking for much more saying he paid you back last time, and acting aggressive. Neighbor B has been probing all the neighbors, testing what he can get away with. It’s human nature to test the limits. Unfortunately you have to be mean and avoid neighbor B, because his antisocial actions say he wants to be segregated. The legacy of integration is the black desire for re-segregation.

And they flip out when a WHITE person stands up to these reggin bastards !!! I think White people should start fighting back with all means ! This shit makes my blood boil !!

The TV and Print media are so hypocritical. They report on this incident of a black kid being beaten and robbed by black teenage thugs, but ignore or dismiss incidents of black on white violence that has been occurring for the past six years. Read “WHITE GIRL BLEED A LOT” by Colin Flaherty. It documents in print and provides sites to actual videos of the carnage and black criminal behavior against Whitey. These black knuckle-dragging Neanderthals raid, rampage, steal, and destroy: neighborhood grocery stores, Malls, County-Local-State fairs etc. Their thirst for destruction never ceases. They enjoy participating in their two favorite games: “Knock-Out and Polar-Bear”. The objective of both games is too seek out Whitey. Preferably an elderly or middle-aged man, woman, or young teenage kid. The black thug sneaks up behind Whitey and sucker-punches him/her from behind. To acquire points in the game, Whitey has to hit the ground, unconscious. No points are awarded if Whitey is still standing after the attack. A score of 100 points goes to the black Troglodyte who has terminated Whitey’s existence in the aftermath of the attack.
The Facts:
1. The tribal mentality of the majority of blacks excludes them from living in a civilized society inhabited by Whitey. They are racists and hate Whitey and will continue to blame Whitey for all of their failures as a culture
2. The black family is in reality raised by a Single Mother and Grandmother
3. Black men are generally irresponsible and that is why their community has to deal with number 2
4. Black thug teenagers are the result of numbers 2 and 3
5. White-left-wing-liberal-lying-democrats are largely responsible for the failed lot of the black culture.
Solution, there is none! Look at the results of the last two presidential elections. Blacks will continue to vote in ignorance and their ignorance will confirm and support number 1.

The severity and dangerous nature of these continuing brutal assaults are still being ignored by politicians and the mainstream media.

There is a current epidemic of this type of desultory violence nationwide and if there is no immediate, direct action taken by law enforcement, the situation will only get worse.

Please read the improtant and timely articles regarding these events at http;//jerrywalkerspeaks.wordpress.com. Tips are offered by experts on how to protect yourself and your family from these animals.

I took a breif glance at jerrywalkerspeaks and wish he would speak to obama just to get his side of the story. Obama is part of the problem of course and the globalist who put him into power.

The 12 year old victim’s family will have to move, more whites will leave Upper Darby especially parents with little girls. The girls will be raped and told their families will be killed if they say anything. The store owners will close because of the robberies, stealing. Insurance companies will not cover the stores. The same pattern repeats itself over and over. Young white men in UD are on heroin supplied by blacks instead of helping to protect the young and old. UD is a ghetto coming to your town next.

A utilities worker said that when he would go to the projects to do work
and he is White, none of the Black people would answer the door.
He said one little Black kid answered the door and said “we hate
White people, don’t we mommy”. This is what is being taught.
I don’t care if they hate White people or not; just keep their violence
to themselves.

So they blur out the face of these young thugs because they are juvenile? Something has to change her, innocent people are under assault, I’m furious!

Single parents, absent parenting, black resentment-mongering, unending government handouts, and removal of personal responsibility by the black perpetual grievance industry have made crimes like this commonplace. This has been going on for decades so the black race hustlers and their white apologists have the violent process down to an art form.

Nothing will change unless the above-noted hustlers are ignored, black people demand civilized behavior from each other, and the unending government handout programs are stopped.

I won’t hold my breath, however. There are very few free thinkers in the black community. Those that do think freely, outside of the toxic-tribalism, are condemned.

The other stations did not cover this

The lady at the end of the interview has it wrong. These kids are being taught EXACTLY what to do and WHO to do it to. It is already old news that black on white crime won’t be reported. Which is translated to, “it’s get whitey time”.

Just imagine if it had been white kids that did this-the poverty pimps Jackson, Sharpton, Quanell and others would have been demanding justice. Just sickening the media turns a blind eye to this. What if it was their kid? Enough is enough. All should be charged with a hate crime-that is exactly what it was.

Kids losing thier souls at an early age is very sad indeed.

You’re assuming they had souls in the first place.
Some traits are taught, and some are innate. These things are like the ones in power. They have no empathy, and therefore don’t care about their behavior and how it effects the lives of others.

“The other set brought him in because they knew it was him on the social media page.”

What do you think this means? That they were saying the kid was racist so he deserved it? They weren’t showing any remorse? They were talking about white privilege and slavery?

How can these “teens” afford Ralph Lauren Polo sweater? Big Polo at that. More specifically what taxpayer funded scam is this? Most taxpayers can’t even afford this.