New: Biking While White in Baltimore. Video of racial violence.

Biking While White in Baltimore. Video of racial violence.

Guy is biking through Baltimore. Group of black people throw bottles at him. Knock him off his bike.

All the time laughing.

And oh yeah, its been happening a while.

Here is the victim’s description:

“Recorded on 4/12/14. Attacked by a group of teenagers on the bike route on the 1600-1700 block of Guilford Ave. You can hear when they threw a bottle at me from behind and then see when I try to grab my lock as a last resort as they started to attack, but dropped it.

Grabbed it before they did. Only damage was to my thumb when they stomped it. Took punches, but they must have hit my helmet, because I don’t have any marks. Camera cuts out at the end around this time. On the ground I started yelling “help help help”.

Residents started coming out and a distant siren scared them off. Called 911 after and met with an officer a few minutes later.”

Now comes the good part from a biking activist web site:  Apologizing because they predators did not have enough stuff to do.

“The only way to know what motivated the specific group of youth who appear on the video is to ask them, but we suspect that if Baltimore had more productive adult supervision and more safe places for youth to learn and engage in positive activities, this incident would not have occurred.”

And oh yeah, this has been happening a long time:

“You may remember last April, there were a number of assaults on cyclists around the Copycat Building on Guilford Ave. This author was among the riders who was threatened but escaped physical injury. Mark Brown, former blogger at Car Free Baltimore, wasn’t so lucky and incurred physical trauma.”

As a matter of fact, I do not remember. Maybe because the local media does not report racial violence. 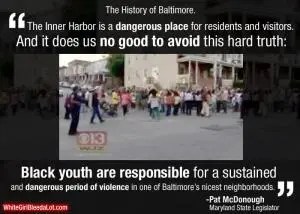 But here is what a few local riders posted about the incidents.

“me and my friend had the same thing happen to us on charles street just north of north avenue where the street lights turn to LED and the trees block a lot of lights. it’s definitely up around there. be safe.”