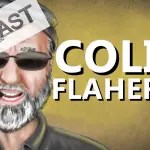 TV star Kelsey Grammer has seen more black violence and murder than most.

Now, just a few days ago, his daughter was attacked and slashed with a knife in a Greenwich Village restaurant.

He’s hardly the only celebrity with fatal and near fatal encounters with the fellas. So let’s talk about their stories, Kelsey, Kelly McGillis, Henry Rollins and Howard Stern.