And the cops even charged 8 black people with rioting. Started at a Kindergarten graduation, next thing you know a “very ugly brawl” starts, then spills outside. 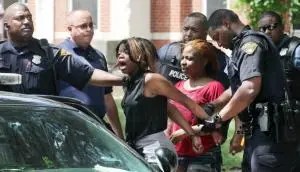 From the Cleveland CBS affiliate:

“You had adults fighting adults, juvies fighting juvies, and so forth,” he said as parents streamed into the building to pick up their children. “You just had a melee here.”

No one was hurt, Drummond said. It wasn’t clear whether the hammer and pipe were brought to the school or were grabbed during the fight from a janitor’s supplies or elsewhere, police spokeswoman Detective Jennifer Ciaccia said.

No charges were immediately filed, but those arrested were being booked for aggravated rioting, Drummond said. The suspects will be charged with inciting a riot, WOIO reports.

City Councilman Jeff Johnson lives across the street from the school, which is in a blue-collar neighborhood overlooking the leafy University Circle arts and museum district. He said the spilled punch set off the fight, with one person pulling out a pipe and another a hammer, leading school security officers to call police.

“It was a very chaotic scene,” according to Drummond, who said the fight erupted as the ceremony was ending about 11 a.m. and then moved outside.

Awww c’mon people…Let’s not jump to conclusions. They just suffered from heat induced stress,
and are just really asking for more funding for their underserved schools.

Also, the ceremonies for their future scholars were’nt up to their standards, and they were just non-verbally communicating their disenchantment. They’ve been sooooo neglected.
Remember, Don’t Worry-Be Happy.

I read about this in the Oregonian today. The race of the participants wasn’t mentioned, but it appears I wasn’t wrong to assume they were black.

The kindergarten graduates were probably the most mature people there. How do blacks expect people to have any respect for them when they can’t even be civil for a school function? If you can’t behave yourself, STAY HOME!!!!!