Thank you kindly for the letter. Especially the part about me being sent from God.

Mr. Flaherty, it is absolutely essential the information you share —no one else is writing about this, and —– this is IT.

I just realized it was your articles I read about the horrific attacks at the county fairs in the midwest with all the gang violence against anyone white leaving the fair. Also the violence in Philadelphia, the flash mobs, etc.

This is now the time of collapse, Mr. Flaherty, and the warned time, and racial violence will be on a scale unprecedented at any time in the history of the US or the world. the Lord moved myself and family from the city of Va Beach years ago because of the racial violence and chaos that is soon to happen.

I knew that when we moved,

I was told that spiritually by God.

This is the time of times, and peopleneed to wake up.

This is the result of decades of corrupted administrations serving communists, and the current leader communist.

There are not enough words, Mr. Flaherty, with which to warn people!
And to your comment about your book being given to a friend: personally I do not know a single soul other than myself to give it to and that is not said because of the quality of your writing.
It is very engaging and direct and makes a strong emphatic point. The only that would read it that I would be aware of would be those in law enforcement or spiritually aware of the times, or living through it or living in cities concerned for their welfare if they have racial violence problems or will.

Such violence is against humanity or the sensitivity that is for many the part of being able to love God or love neighbor, family especially, and be charitable, for being human, and to show compassion and concern for others.

So this is why many people would not want to read it, and myself being humane would not normally want to read it except that you are reporting in such engaging writing and clarity the events, and Va Beach especially catching my attention, and the other cities, the stark numbers are alarming of the endless attacks of violence on a daily basis, that I am going to read it, because it is the time of times. 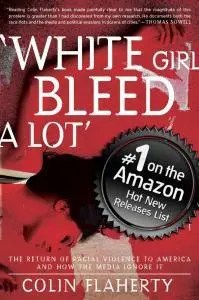 This is inhumane what is being documented by your writing. The title alone shows the inhumanity. It is like something out of Rwanda and that bloodshed.

White people are now being treated as the minority and it is showing itself to be by all races — not just black or African American but Mexican violence against Americans and white Americans is increasing, Asian, etc.

I personally saw shown me by God years ago, all the police of this country being removed by the African American individuals, by gangs, racial violence, racial discrimination against whites, drug lords and gangs, when there was complete collapse. They, the police, the Lord gave me were to be the first to go, for the complete chaos that other elements would want, and enslavement.

This violence, this is the “final beginning” or end steps with war in the Middle East, of the enslavement. No Americans will be safe without divine protection in the ensuing collapse. Only God will be able to help.

This was also warned, Mr. Flaherty, for the US and the entire world, for the lack of prayer and requests given by the mercy of God by means of His allowing the various apparitions of the MOther of God Who particularly appeared at Fatima asking for prayer, the praying of the rosary, for penance and living lives for God and His commandments, not for the world, nor self, nor indulgence, and to save souls.

I want to tell you that visibly I see a great difference and this is the truth: before I began praying the rosary when walking, I saw snakes all the time, in my path; always had strange men always stopping their trucks or cars or mopeds trying to try to speak to me, and I do NOT dress for attention from any men or anyone, I am very modest.

When I pray the rosary, showing it visibly while walking in prayer,

no one ever stops, no men threaten me, no snakes now for quite some time or they are dead snakes, there are no longer any stray dogs or neighbors’ dogs running after me (there is no leash law here and the owners don’t have to have them chained, so they would run at me all the time).

I had to carry a Louisville Slugger bat when my son was much younger and we would walk, because the dogs would run at us, and I had to run after them literally asking the owner to call the dogs off, to which she replied that the one dog was deaf, and I had to yell asking why was she just standing there watching her dogs attack us?

I had to hit them with the bat, and the one I hit turned out to be friendly and followed us home the next time, tail wagging, and I had to walk him all the way back for him to leave us.

I have seen tornados turned from my house and property, troublesome teenagers at night visiting the camping park near by, you name it, and can say that anyone that does not have a strong faith in God will not survive what is ahead,  they will NOT.

Preparations should be made by anyone, especially those living in the cities or areas of large mixed race populations.

One incident since I have read your articles and these attacks are now being brought to my attention: in mid July my son and I were about twenty miles north of here, and on our way we were passing a gas/convenience store in that area, and could see visibly from the road that there was a police car sitting sideways in the front of the store.

Off to the side it was then clear there were on the other side of the store, on the side, a congregation of about 15-20 African American youths and young adults, of any age, on motorcycles, of various kinds, and they were causing some kind of trouble. That never used to be seen or happen before.

God bless you, Mr. Flaherty. I personally would give any policeman an exorcism medal and rosary for their profession if I met any or any spoke to me for any reason of the violence and attacks to which you are privy or receiving such information.

I believe they will be removed quickly by the vast forces of evil and that is sad, there is no preparation for a country without police enforcement but foreign troop and military intervention. And that is the plan, and now they are releasing gangs and criminals to assist the overall plans for the enslavement of the US and all countries in the times shortly ahead.

I believe you have from God, Mr. Flaherty. May God bless you and guide you always.

As well intentioned as this person is, unfortunately, it is primarily an issue to be laid firmly at the feet of the Vatican. They have stirred up and broken down all solidly Protestant and formerly safe countries. Do your own research.