I get the greatest letters:

I just watched your latest YouTube video and as usual, you hit the nail on the head.

Especially interesting to me was the part about DeSean Pittman. This was a story that I had followed and also researched a bit.

DeSean Pittman has a Facebook page where you can find pictures and videos of him with his guns. On Facebook, he was called Famouss Montana.

Once you start snooping on Facebook you can find all kinds of his connections. DeSean’s father is on Facebook as Chef Reggie Pittman. His page is a must see! He had pictures with his son not wearing a shirt but bandages covering his gunshot wounds! DeSean was wounded just months before his death. (All Below.)

His father talks about the police “murdering” his son, along with a whole other bunch of garbage.

(I’VE BEEN FOLLOWING HIS TWITTER STREAM… THEY STILL TALK ABOUT HIM EVERY DAY. YOU CAN SEE IT @STOPFLEXINNN)

DeSean’s friends call him a savage. Yes, there is a lot of evidence of the life he lived and his disregard for laws and life.

Being an author you, none of this may be new information to you. I just wanted to bring it to your attention.

GREAT LETTER. HERE ARE THE PICS. I WROTE ABOUT THIS AT THE TIME, BUT A LOT OF THIS IS NEW TO ME. THANKS!

Here are some pictures and some links.

There is a video of DeSean beating the crap out of somebody on a bus, but I can only see it on his timeline when I go to his Facebook page through the app on my iPad.

Dad is also a gentle giant. 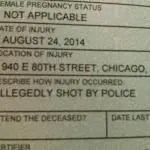