Who is responsible for black mob violence in Louisville? YOU ARE.

Who is responsible for black mob violence in Louisville? YOU ARE.

Before and after the Attorney General said black children were victims of racism is schools, racial violence was bursting out all over the country. Most involving black school children.

And more recently, NPR told us who is responsible for all this black mob violence.

An article exclusive to this web site.

The Quiet Riot Holder Did Not Talk About

Black children are victims of racial discrimination in school, says the Attorney General. Yet one week before and after his press conference on racial disparities in discipline in March, black mob violence and lawlessness flared up all over the country. Most of it from school-age children.

The recent black mob violence in Louisville two Saturdays ago was a lot worse than anyone first reported. By the time this three-hour crime spree was over, police said there were 17 assaults and six hospitalized. No one counted how many trash cans were thrown, cars stomped or locals terrorized.

Several victims said police refused to take a crime report of their assault.

And, and oh yeah, t’s been happening a long time, said the owner of a local grocery store whose business was hit on video by a group of 50 black school-age children stealing and looting and beating their way through his shop.

The assistant police chief in Louisville wrote a memo warning her superiors about numerous recent episodes of violence from groups of “black males” throughout the city. And how they should prepare for more. Despite several reports of black mob violence in Louisville over the last several years, city officials say that was the first they heard of it.

In Kansas City, a few days before the Louisville riot, 200 black people fought and pushed and assaulted and destroyed property at the local zoo’s second annual Free Day. The same thing happened during the first annual free day last year.

Kansas City mayor Sly James got testy with a local reporter who asked if this mob violence was in any way related to the dozens of episodes of black mob violence at the upscale Country Club Plaza.

When Mayor Sly took office in 2011, he promised that frequent black mob violence would be gone within 6 months. It just got worse — including an episode where a gun was fired on the Plaza 50 feet from where he was standing. And oh yeah, it has been happening there a long time.

In Philadelphia the day after Holder’s announcement, a group of black teenagers attacked three college students from Temple University in two separate episodes 15 minutes apart — hitting one in the face with a brick. When another of the victims went to the police station right after her attack, she said police did not want to take her report.

Perhaps the student would have been better served had she sought help on campus: Temple University is a center of scholarship for Critical Race Theory that says white racism is everywhere. And white racism is permanent.

Racial violence is inevitable because white people deserve it. That is what a Philadelphia family court judge, writing in his blog The Field Negro,  recently said about a Thomas Sowell column on the book White Girl Bleed a Lot: The Return of Racial Violence to America and How the Media Ignore it.

“Here is the deal, no matter how violent some young black punks act and wild out towards groups of white people–or a single white individual, it will never make up for all the violence that was practiced against people of color throughout this nation’s history. So spare me the isolated (and high profile) incidents of horror.”

That won’t help any of the victims get justice. But it will help explain why some do not take black on white violence seriously.

Also in Philadelphia a few days after Holder’s announcement, an anti-violence counselor was beaten and left unconscious after black students attacked him. And oh yes, violence against teachers in Philadelphia schools has been happening a long time.

In Seattle, the night before the Holder announcement, a human rights law student approached a  group of black teenagers on a  commuter train with his hands open and palms up in a gesture of peace and goodwill. He explained to them he did not wish to fight  but he did want them to stop bothering the other passengers who objected to their smoking.

They broke his jaw. Then laughed. And oh yeah, its been happening there a long time.

In Dover, Delaware, the night before the Holder announcement, hundreds of students from a black college fought, destroyed property and defied police in and then outside of a local casino. And oh yeah, its been happening there a long time.

In St. Louis, two nights before the Holder announcement, a large group of black people fought and destroyed property late into the night. The second such occurrence in less than a week, said the local media. And that does not count the 50 black people rampaging through the downtown, threatening, destroying property and creating mayhem soon after. And oh yeah, that has been happening there a long time.

In Covington, Kentucky, less than one week after Holder’s announcement, police arrested 60 suspected heroin dealers, almost all black. In Chattanooga earlier this year, black community leaders complained of racism after a similar operation took down 32 of the “worst of the worst” put all their pictures on the front page of the local paper. All of them black.

In Rochester, the same day that Holder made his announcement, a large group of black students fought and destroyed property, at Frederick Douglass high school. Five were arrested. And oh yeah, its been happening there a long time.

In Orlando, the night before the Holder announcement, police used pepper spray to break up a large group of black students fighting and destroying property in the downtown.

In Louisville, prior to the riot, a group of black students attacked a 41-year old man. He pulled a knife and killed one. On video. Several days after the riot, a local TV station reported, oh yeah, that’s been happening on Louisville mass transit for a while.

Also in Louisville, a week after the Holder announcement, police announced that a group of black people have been robbing, assaulting and raping near the University of Louisville campus more than 40 times over the last two months.

In Memphis last week, a mother was arrested for leading her daughter and a large group of black students to the home of white girl to assault her.  And oh yeah, that had been going on a long time. School officials called it bullying.

In Paterson, New Jersey, five days after Holder’s announcement, police responded to reports of a large fight at a school involving at least 20 black students. And oh, yeah, the teacher’s union said that happens on a regular basis.

In Cleveland, before and after Holder’s announcement, groups of black school-age children are responsible for a series of assaults and robberies — several on video — connected to the city’s mass transit system. And oh yeah, that has been happening for a long time there.

In Cincinnati one day after the Holder announcement, a group of young black women beat and robbed two sisters on video. And oh yeah, that has been happening there a long time.

Madison, Wisconsin is the site of regular episodes of black mob violence. Police say an attack earlier this month was the worst they have seen in recent memory. Six black people broke into a home and robbed and beat the occupants. They sexually assaulted one of the residents, who was six months pregnant.

Five days after Holder’s announcement, 2500 people of all races from around the country met in Madison at the annual White Privilege Conference. They say black and white people commit the same crimes in the same amount, but because of white privilege, black people are arrested more often. 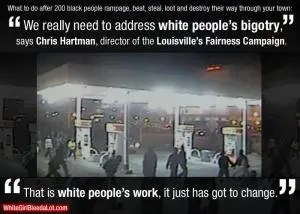 From NPR in Louisville

Every cop in America — black and white — says that is not true. But they say it anyway.

Glen Singleton has a company that trains teachers in hundreds of school districts about how to recognize their white privilege. And how white teachers create racial disparities in the classroom. For those who wonder why violence is such a regular feature of life in schools with black children, Singleton breaks it down in his book Courageous Conversations.

“White educators are prone to wondering why black and brown boys are prone to fighting in school,” he writes. “They question why violence is taught in homes of color. Missing from this analysis however is how these boys might be affected by growing up in a White-governed country which threatens young men of color at will, distrusts their ability to succeed and follow the law, and allows daily racial stress to mount in neighborhoods, schools and classrooms.”

One recent victim of the Singleton treatment gave an insider view:

“I am hesitant to comment because of the nature of my job, which is eaten up with left wingers,” he said in an email. “I will say that Singleton alone created a hostile environment at the session I attended, where it was assumed that all whites were racist and had no business teaching black kids.

“I have twenty years as a coach and teacher in black schools, so it was a surprise to me that I was racist and unfit to coach black kids. It was an insult a minute, that prompted “Amen” from some of the blacks in attendance.

“I, along with the majority of whites I spoke with, were completely insulted, and this was the intent, as Singleton strode to the microphone at the beginning and said he was there to “make us uncomfortable.”

“It was ridiculous and lasted for three hours. Black coworkers were taught to look upon their white coworkers with a suspicious eye. It was a mess.”

A few days after the Louisville riot,  community leaders attened a de rigeur community meeting. The consensus about the cause of the violence: White Racism. Just ask NPR:

“We really need to address white people’s bigotry,” says Chris Hartman, director of the Louisville’s Fairness Campaign. “That is white people’s work, it just has got to change.”