It would never occur to me to ask if an example of black mob violence is racially motivated.

That would require skills that apparently I am the only reporter not to possess: Mind Reading.

Down in Ocean City, Maryland over the weekend, there were two examples of mob violence involving black people.

So I dash off an email to the local police, who kindly calls me on the phone to assure me the crimes were “not racially motivated.” 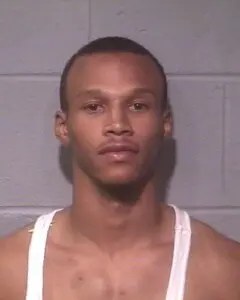 I never said they were. Or wondered if they were. Racially motivated, that is.

I am not the Amazing Kreskin.

But what I am doing is compiling a record of black mob violence that exists exponentially out of proportion. All over the country.

In one case, here is the police press release:

Officers attempted to separate the two males; however, one of the suspects, who was later identified as Joseph Tyrice Cromartie, 20, of Clinton, MD, became combative and assaulted the officers. One of the officers used his Electronic Control Device (Taser) to subdue Cromartie, who was eventually arrested.

By that time, the large crowd which had gathered at the scene began acting in a disorderly, aggressive manner, taunting and making threatening statements towards officers.  Additional officers responded to the scene, including K-9 and mounted patrols, Worcester County Sheriff’s Deputies and Maryland State Police Troopers. The crowd was quickly dispersed and order was restored to the area.

The people arrested are black. And everyone else there was black.  But it was not racially motivated, the public information officer kept telling me. It was just a group of unruly people between the ages of 16 and 21.

Here’s another excerpt from another police report:

Officers located the victim, who was identified as a 22-year-old male from Washington, DC, in the lobby of the hotel. The victim, whose name is not being released, was bleeding from numerous stab wounds.

The preliminary investigation revealed that the victim had been engaged in a fight on the boardwalk in front of the Stowaway Grand Hotel.  According to witnesses, approximately 30 persons were involved in the fight, at which time the victim was repeated stabbed and then helped into the lobby of the hotel by unidentified citizens.

The guy stabbed and the suspects are black. The Public Information Officer informed me that the crowd was not exclusively black. Which contradicts what people say on the Internet. And what people at the hotel tell me.

As for the guy who was stabbed? He’s not talking.

Here’s another example of mob violence in Ocean City from September and pictures of the people involved: 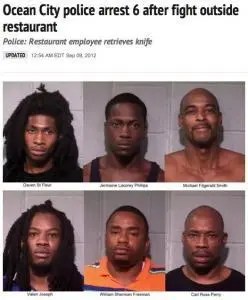 Is it racially motivated?

I’ll ask my gypsy fortune teller next time I’m in San Diego and I see her.

Until then, know this: Black mob violence is alive and well in Ocean City, Maryland.

As is official and media denials of it.

Everything that is said out loud about this is governed by political correctness. No one can look and no one can say anything unless they are prepared to accept the consequences. The same holds true for the moozlims. Political correctness makes it so they do anything they want and everything is just fine and dandy. You see, both races have suffered the PAIN. That is both races have suffered great PAIN at the hands of the big-bad-white-man for millions and billions of years. Oh the PAIN, oh the PAIN, oh the PAIN the two races have suffered at the hands of the big-bad-white-man, oh the PAIN. I uses to go to Ocean City in the 60’s. It was extremely nice. I used to ride a rented bike on the boardwalk. Yes–talk about nice. Holy Moly–not now. Keep up the good work.