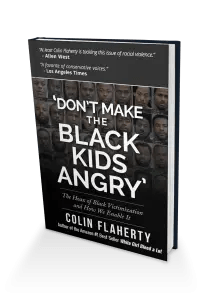 I will share some stories. No problem. I hope it is ok to just give you one or two at a time?
My wife and I attended William Penn Elementary school on township line rd. in Chester from 76′-81′. Third through fifth grade is when things started getting bad. At that time there were new teachers starting to trickle in. Black women who graduated from college and became teachers.

White teachers were quitting and transferring. Students population started changing because whites were moving out(white flight). The once friendly and healthy environment that we had was changing. Fighting and arguments between students increased, cursing and Ebonics was introduced at that time. We had a fifth grade black pregnant girl!

In fourth grade I was surrounded by a group of 8-10 black kids some of them were teens, I was punched in the face and they asked me “watchu gonna do about it white boy”. I went to a teacher (black woman) and as I was crying told her what happened and she told me to “just go play”. I had a bruise on my face for a couple days. My parents went to the principle and the one kid did get suspended.

The schools were the hotspots for clashes . The blacks hated white people, they were taught that we were the reason for all of there problems.Elementary school wasn’t half as bad as middle school! I graduated William Penn Elementary (5th grade) and moved on to Pulaski Middle School on 7th and highland ave. This school was fed by many different federal housing projects. This was a freaken nightmare! I was already listening to the stories of my brother and his friends fighting their way home from school twice a week and he had twice as many friends as I did…

How was I going to survive? Why were my parents letting me go? I was ready for war. Well… I wasn’t disappointed. I was suspended for fighting three times in four months. The police brought me home the third time and I was expelled ! Why ? Because the blacks hated me and I knew it and I didn’t take their shit. When I was there in sixth grade there were about 12 white kids in the whole middle school maybe two or three white girls. The only blacks I knew were the boys that I played little league baseball with and some from William Penn.

They didn’t like me either. Why? Because I was white.

Bikes were being stolen , cars were being vandalized and robbed, homes were being robbed, children were being beat up and robbed for money. Most of the people who could get out of the area started moving. It didn’t take long for the Mcaff to transition from 60% white to 90% black.

Most of the people who lived in my area were pretty tough . Most of us learned to fist fight or if we had to , pick something up and use it. The problem was the younger white kids weren’t as animalistic as the younger black kids so they bore the brunt of it. Most of us younger kids had older brothers that would toughen us up, or back us up.

The blacks in the Mcaff knew that there was a boundary line on clover lane. We lived on clover lane and held that line until my early 20’s.

The experience at Pulaski middle school was not healthy at all. Most of the teachers seemed old and ready to retire . Most of the white kids that didn’t move from the area were going to private schools not Pulaski.

While I attended Pulaski I was a target ,but the more I fought back the more they respected me .I was still a target for abuse and revenge . I never went into the bathrooms , and never felt safe in the hallways . One morning at gym class I got changed, and put my clothes in a locker with a lock on it, and when I went to get changed I couldn’t find my clothes . I went to the (black) gym teacher and told him my clothes were missing he assigned two black boys to help me find them . I was led directly to a running shower in the locker room where my clothes and a cut lock were stuffed in a waste basket with the shower water running on them.

In music class we had bleachers that the metal chairs sat upon. Most of the chairs were bolted down in the top back row. One morning a black kid invited me to sit next to him in the back top row, so I accepted and climbed to the top back row about four feet off of the ground and sat in my prearranged seat and fell backwards four feet to the floor and hit my head so hard that I was unconscious . I do not know how long I was out, but I woke up with a black music teacher leaning over me yelling “your seat was not bolted down” he never sent new to the nurse, he never told my parents that I was unconscious . I was lured up to that seat and set up for a fall. The kid moved one leg of the chair off of the bleacher before I sat down which made me fall backward . I remember it like I just happened yesterday. The teacher did nothing .

He is also the author of White Girl Bleed a Lot: The Return of Racial Violence to America and How the Media Ignore it.

Both books are about black mob violence, black on white crime and the Knockout Game — and how public officials, reporters and activists deny, excuse, condone and encourage them.

Click here to enter a weekly drawing to win a FREE AUTOGRAPHED COPY OF ‘DON’T MAKE THE BLACK KIDS ANGRY’.’