A black mob attacks police: Here are a few videos of the recent riot in chicago:

Here’s a longer one, chaotic, and hard to hear, but you get a picture of the scene:

Here are the mug shots of the folks arrested. 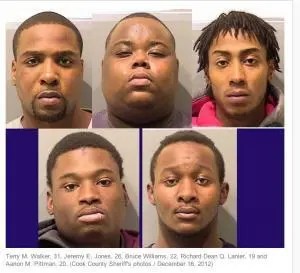 The Mom’s point of view from the Chicago Defender.

Was this a Tea Party rally?

Rioting is just another way these animals steal from others. Black people, as a group are animals. They shoot each other without any arguments. But when a White person defend themselves and shoot these criminals they get all riled up. They are self-destructive and a drain on society. When 12% of the population fill 55% of the prison population then something is really wrong

On an unrelated note, anybody noticed all the iPads in this crowd? Is this what they mean by urban poverty? iPads should be banned as must be the leading cause of hunger in minority children. First it was Nike, now it’s Apple that is laughing all the way to the bank. Or maybe I’m missing the point here – they all bought those iPads for work. Yeah, right…

Here we see blacks siding with armed robbers over police for no other reason except that they’re black. And they call US racist? I swear, if two blacks guys came upon another black guy raping a white baby, they’d help him hold the baby down.

Are these people so stupid that they cannot see their part in, yes, the parts they play? It’s all so retarded.